The first example of a bassoon was seen in the 16th century. Like the oboe, it is also a “ double reed” instrument but with a low, deep, and mellow voice. At 8 ½ feet long, it is the largest and lowest sounding woodwind. To make it playable, the bassoon is doubled over into a narrow U- shape so that it stands only 4 feet off the ground. You can often see the tops of the bassoons over the rest of the orchestra.

The bassoon is made of wood with a metal crook which holds the reed. The air goes through the curved metal tube into the middle of the instrument.

The bassoon is often the backbone of the woodwind section. Playing the bottom notes of the woodwind chords in one of the most important jobs of the bassoon. However, the bassoon has a very versatile and expressive sound and can play both very low and very high. Because of the distinctive sound that is easy to identify – deep, reedy, and nasal – it often plays “the clown” in orchestral music, frequently playing humorous sounding music. The bassoon is also capable of playing very beautifully and soulfully.

Most orchestral scores call for two bassoons. Occasionally, a composer will write music to include a contrabassoon as the third instrument in the section. The contrabassoon is a twice as long as the regular bassoon and is able to play a full octave lower. The contrabassoon can produce the lowest sounds possible in an orchestra, even lower than the double bass. 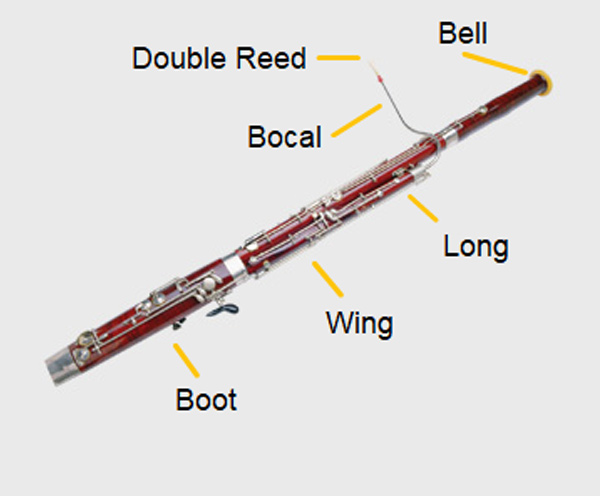